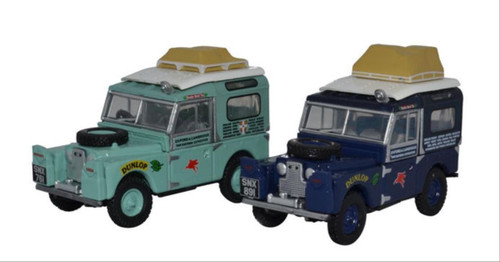 The universities of Oxford and Cambridge came together for this expedition and we have recreated this elaborately decorated 2-piece set, comprising two Land Rover 88” Hard Top models The Oxford and Cambridge Far Eastern Expedition was organised by Land Rover as part of their publicity campaign promoting the launch of their new Land Rover Series 1 Station Wagon in 1956. Five of the six participating Oxbridge students had just finished their degrees, each charged with a specific role on the expedition. They set off from London on 1st September 1955 and flew to France where they continued their expedition in the two Land Rovers – one pale blue (Cambridge) and the second dark blue (Oxford). They arrived in Singapore on 6th March 1956, the journey having taken six months and six days over 18,000 miles. A book on their exploits - First Overland from London to Singapore – was written in 1957 following the expedition by Tim Slessor, one of the Cambridge participants. Upon their return, the two Land Rovers which had been officially named ‘Oxford’ and ‘Cambridge’, went their separate ways. Cambridge was sold to the Land Rover Factory in Solihull but was sadly lost on a later expedition when it ran off the road in the Middle East. However, Oxford still survives under the ownership of Adam Bennett who restored it to its original livery, even down to the registration plate. It passed its MOT first time around and continues as an active roadworthy motor! This fantastic story is marked by these two 1:76 scale models which feature so much detail of the expedition. The names of the places en route are printed on the sides; the sponsors are also colourfully displayed from Brooke Bond Tea to Dunlop tyres and even Mobil’s Pegasus logo features on the doors! On the Cambridge model, you will notice Whisky and Soda printed in red on the front wings whilst on the Oxford version, the chosen tipple is Gin and Tonic! Cambridge was registered SNX 761 and Oxford SNX 891. Additional components on our models include fuel cans and canister holders, a roof rack with ‘canvas’ cover, a winch on the front bumper and a spotlight on the front of the roof. The team’s adventures along the way are well worth a read – must get the book!